As the seasons fly by in this new city of ours we learn more about the traditions and “must do’s” of the present season. Amongst coworkers and friends we learned that heading upstate to visit apple orchards and pumpkin patches is amongst the things you must do in the fall. A coworker of mine told me about Wilkens Fruit & Fir Farm which not only has pumpkin patches and apple and peach orchards but it also has a wine tasting room and state famous bakery with apple cider donuts. Umm did you say wine tasting room?

After a few convincing conversations to persuade Zach into this plan, we picked a Sunday in October to make the trip. One hour long train ride from Grand Central and a fifteen minute cab ride later we arrived at the farm. It is a family owned estate where the family home actually resides on the property, and boy was it bustling with people! 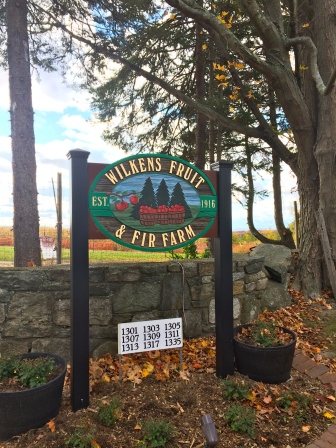 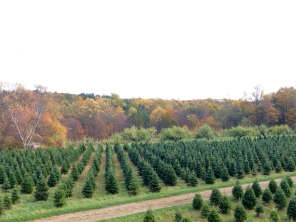 We made our way to the tasting room first which was FULL of twenty-somethings and parents who were gettin’ their drink on while the grandparents played with the kids elsewhere on the grounds. 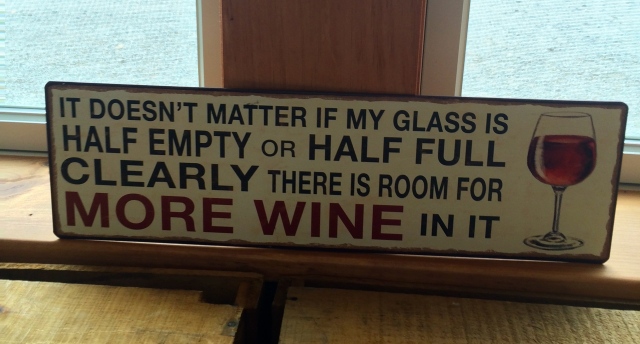 Alright, I’ll confess. I am not a huge fan of New York or Northeast wine. I’m not actually sure how to explain it in words but it lacks something rich and full-bodied in flavor like Washington and California wines. I mean, don’t get me wrong, we drank the wine (c’mon, it’s me we’re talking about!) but we definitely skipped purchasing a bottle to bring home like the original plan.

One of the hooks to Zach agreeing to come to the farm was learning that they had a corn maze. After wine tasting we made our way over to the corn maze to see how long it would take us to get through it. A few steps into the maze and Z was quickly disappointed to learn it was a very easy maze to get through. Thus began the Harris off roading game through the untamed areas of the maze to create our own way out.  It was actually pretty fun despite my hesitation and bizarre fear of really getting into the corn maze. I’m used to mazes being around Halloween with scary dressed up monsters inside! But this was playful and silly and it ended up being a very fun part of the day. 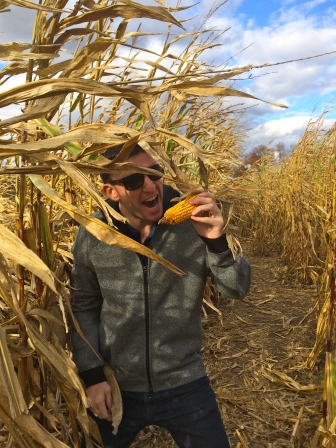 We spent the rest of the afternoon walking the grounds through the pumpkin patch, Christmas tree fields, and farm gift shop. I’ll use the work pumpkin patch loosely. The “patch” was more an area where pumpkins were set up after they were taken from their actual patch so people could shop more easily. While we intended on bringing a pumpkin home we realized we didn’t want to carry a giant pumpkin back on the train for an hour and then during the walk back to the apartment. Oh well! The farm was gorgeous to walk around and it certainly put us into the autumn spirit. It was so NICE to be out of the city and just absorb the quiet and calm of the country. It just reminds us how important it is to get out of the city every once in awhile to ground and calm yourself in the great outdoors. 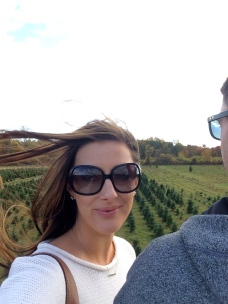 Oh and those famous apple cider donuts? Well the line at the bakery was constantly 20 people deep outside the shop so we gave up before we even jumped in line. It turned out to be a very cold and windy afternoon so we headed back into the city for dinner. We both agreed it really was such a fun outing despite the hiccups in the day (no wine, no pumpkin, no donuts) and we loved being in the country for the day. It might just be a seasonal Harris tradition!

Mr. Harris. I am grateful that you are willing to humor me when I come up with some of these more Joey-centric adventure ideas that may not always be your cup-of-tea. Your playful nature and silliness throughout the day gave me belly aches from laughing all day and your attitude about embracing the day is so appreciated. My partner in crime always, I love exploring this vast state with you and learning more about this new lifestyle we’ve entered into. It makes me happy that your open mind led you to being glad we did it. I’m making a mental note for next time we embark on a Zach-centric adventure!

And thanks for sacrificing your normal Sunday on the couch with the NFL. That doesn’t go unnoticed. I know that’s a pretty big deal 😉