One of our goals for 2017 was to finally begin exploring the cities on the eastern seaboard. 2016 was a year of acclimation to the city and really exploring Manhattan so this year we wanted to explore outside the city limits. As West Coast kids we are limited in how much we’ve seen on the East Coast, so we comprised a list of every available weekend of the year and the cities we must see. We corresponded available weekends with the cities we wanted to see. My work schedule can be a bit tricky as I work one weekend day every week but with planning ahead we can sometimes get things switched to make getting out of town a little easier. Two days after we made the calendar I realized I had a last minute opportunity to switch some shifts around which would allow us a little less than 48 hours to get out of town. Philadelphia had been at the top of our list for awhile, plus it is so close to NYC. It also looked like an easy trip whose fun-factor would not be weather-dependent. So two MegaBus tickets and a hotel reservation later, we made our way to Philly!

We had a short list of tourist-y things we wanted to see so we tried to plan the limited time accordingly. Zach really likes to have a specific plan when we travel (no surprise to those who know us well!) and I really enjoy the walking around, “living like a local” type of travel, with a little taste of the tourist-y stuff. Priorities: The Rocky Balboa Steps, the Liberty Bell, Reading Terminal (like the Pike Place Market or Chelsea Market of Philly), and the LOVE sculpture. 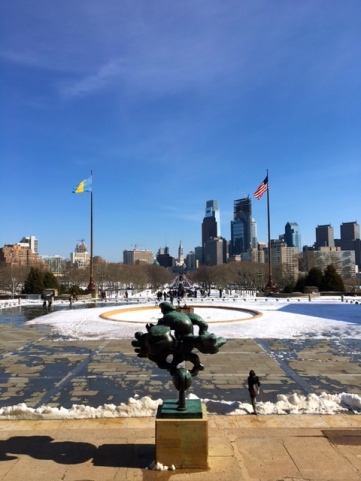 We kept saying throughout that first day how much the city reminded us of Seattle. The people are friendly, the buildings are a mix of either rich history or modern flair, and it was a very walkable city (we only used an Uber twice the whole weekend!). There was snow on the ground but the temps were in the 50’s so it didn’t feel so bad. Note: I can’t believe my SoCal blood is saying that 50 degrees was not so bad. Face palm.

The Rocky Balboa Steps lead up to the Philadelphia Art Museum which we sort of peaked our heads into before we stumbled upon a statue of Rocky. There was a line of people waiting to have their photo taken with the statue and a random citizen was offering to take photos of the groups of people. When in Philly! We also just had to run up the steps to live out the Rocky experience. I mean, c’mon. We couldn’t leave without doing that!

The city has such great signage throughout that you really don’t need Google Maps to figure out what there is to do near you or around you. We walked back towards downtown and saw signs for the Franklin Institute of Science.  Lots of interesting exhibits and interactive areas, but I most enjoyed the statue of Benjamin Franklin. 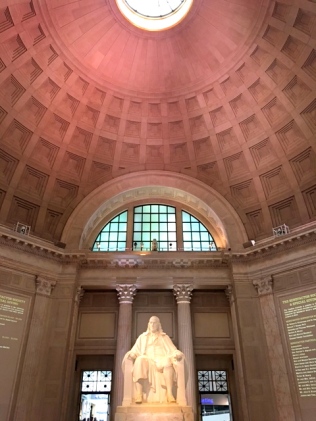 Day two we set out with a few more missions of tourist excursions before we eventually settled ourselves at a sports bar to catch some of the March Madness tournament. First, we went to see the Liberty Bell which, truthfully, I expected to be so much bigger. I don’t even know WHY I thought it was going to be big but it was certainly not as grand as I expected it to be. There was a really informative and expansive exhibit about the history of the bell, how it wasn’t actually a “liberty” bell given the injustices of slavery and women’s rights at the time it was created, and how it wasn’t really rung the day the Declaration of Independence was signed.

After the bell we took a walk across the street to see Independence Hall where the Constitution and Declaration of Independence were debated and signed. It was pretty remarkable to see how these buildings have survived over hundreds of years. We decided to forego the tour and just walk around to explore the site.

We made our way to Reading Terminal which was very cool but a TOTAL ZOO. We took a ten-minute walk through it and looked at each other and immediately realized that was all we needed.

After a long lunch and some college basketball we made our way to the final item on our list, the AMOR sculpture. Upon researching on the way to Philly, we discovered that the LOVE sculpture was removed and being renovated to make its reappearance in summer. In its place is the AMOR sculpture. We arrived with only one other couple there and the rain was starting to fall. We agreed to get a quick selfie and make our way back to the hotel. However we quickly realized that the guy had just proposed to the gal and moments later a huge group of people, their friends and family, crossed the street to surprise the gal with a celebration. So while it was so cute to witness it was kind of crushing our quick photo plans. We eventually made it work and got out of the rain! 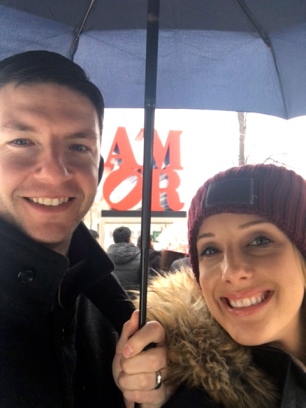 On our last night in town we spent the first half of the evening at Moshulu, a large ship in the harbor near the city, with a full restaurant and bar. Great recommendation from Dorothy and Cole! We ended the evening at this darling jazz bar recommended by my coworker, Sarah, called Time, with live jazz music and different clocks throughout the entire bar. Besides the amazing ambiance the bar had a list of Washington state wines that made me feel right at home! 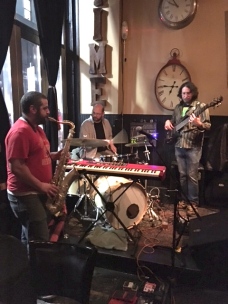 Overall, we really loved Philly. Every restaurant, bar, or social interaction we had with people was friendly and welcoming. The first restaurant we went to gave us a round of beers on them as a welcome to the city. Our hotel cafe gave us free breakfast sandwiches, just because. It was starting to get a little weird! We are so used to the rough, angst-filled New Yorkers that we were startled by the friendliness at times. A reminder of why getting out of the city is so important! It was a cool town with an authentic culture that really explains their motto of brotherly love.